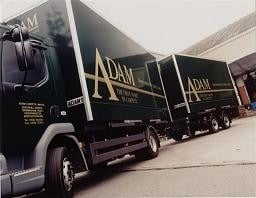 We could get everything we needed via the internet, and did not need or want any extra or complicated software loaded onto our computers.

Established in 1928, Adam Carpets is a highly-respected and successful carpet manufacturer supplying a wide range of customers including prestigious household names like John Lewis and House of Fraser.

With the company offering over 500 colour standard options from just its retail domestic range, as well as bespoke options for interior designers, architects and contractors, the Adam Carpets team has to be highly organised. Chris Adam, director of the Kidderminster-based company says:

“We deliver up to 1,000 pieces of carpet to customers across England and Wales each week and have trucks operating 24 hours a day out of four depots, so I think it is fair to say that we need to run an extremely ‘tight ship’ and are always looking to be as economical and productive as we possibly can.” Chris opted to work with the Quartix team for several key reasons:

“The pricing structure was transparent and simple, unlike the two other products we considered, which were exactly the opposite. We were also offered a straightforward trial of the Quartix system with no strings attached.” However, perhaps the deciding factor in Quartix’s selection was the sheer simplicity and the absence of those dreaded extra IT hassles and costs: “We could get everything we needed via the internet, and did not need or want any extra or complicated software loaded onto our computers. All the databases and IT management is done for us.”

At the time of writing, Adam Carpets has seven trucks fitted with the Quartix system. However, Chris and his colleagues have been significantly impressed and 2 more trucks will be fitted with the system in the near future. “We have Quartix’s website running on a PC in the transport office all day. We simply log into our ‘account’ in the morning, then leave it running on the ‘latest locations’ page with ‘all vehicles’ selected.

“This achieves two goals firstly my manager has a snapshot of exactly where his drivers are and can often see they’ve been delayed before they need to ring the office. Secondly, if a customer calls to check when their carpet will be delivered, the manager can pick up a driver’s route. Then, in conjunction with the Quartix screen, he can give an immediate estimated arrival time. Our customers have really appreciated this.”

Like many astute businessmen, Chris Adam is always looking at ways to increase productivity levels and Quartix has proved to be a useful ally. One area that managers at Adam Carpets have been able to influence is slow unloading times:

“We have certainly been made aware that some of our customers are better and faster at unloading the carpets than others!”

Cutting out unnecessary overtime payments has been one of the other major benefits of using the Quartix system. Chris Adam explains: “As our trucks are literally operating 24 hours a day things can become fairly complex, especially as one truck will have been used by two drivers during this period. However, our drivers’ timesheets are very accurate and therefore we are not under or overpaying people.”

When you’re operating a busy fleet like Adam Carpets, vehicle maintenance issues can be a high priority and tracking technology has played a useful role in this area as well according to Chris: “We certainly don’t want our vehicles off the road any longer than they need to be, so having the ability to keep a very close check on mileages and then manage servicing and maintenance schedules has been very welcome.”