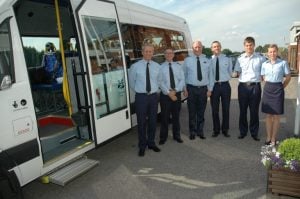 We received a recommendation from a local council who had implemented the Quartix system. With it now installed, we’re better placed to give accurate, live, location updates to our service users.

ESRTP (East Surrey Rural Transport Partnership) evolved from the teamwork of regional and County Councils in the East Surrey region. Their aim was to improve access for residents to health services and other facilities. The company now has charitable status and has expanded its’ services to help people get to work and also offers accredited training schemes.

In 2001 a group of district, borough and county councils decided to take action to help its rural residents access health care and a wider range of facilities in East Surrey. In 2006 the organisation became the East Surrey Rural Transport Partnership (ESRTP) run by Chief Executive, Marcus Dodé. The company has charitable status and encourages and co-ordinates public and community transport schemes to serve those in need, with particular emphasis on assistance for those with disabilities or who are isolated. Today ESRTP employs 62 people and operates 47 minibuses.

As part of constant evaluation of business practice and operational safety and effectiveness, ESRTP looked at installing vehicle tracking. Recommended by a neighbouring council, ESRTP looked at the Quartix system in conjunction with other tracking suppliers. Chief Executive, Marcus Dodé explains, “We received a recommendation from a local council who had implemented the Quartix system. With it now installed, we’re better placed to give accurate, live, location updates to our service users. We take our obligations as operators of a Community Transport Service very seriously and we were delighted when Quartix added Nextbase dash cams as an optional extra. This adds an extra layer of protection for our travellers and our staff”. The simplicity and competitive price of Quartix were also main attractions according to Mr. Dodé and the positive impact it would have on their perceived risk, thereby reducing insurance premiums.

“Using Quartix provides a quick, effective method of checking the progress of our vehicles and highlighting any issues.”

The charitable status of the company and its corporate responsibilities are always at the forefront of operations. The Quartix reports help ESRTP to simplify and cross check overtime claims from drivers and focus on service delivery with promotion of safer driving styles. Performance management of driving has demonstrated less wear and tear on vehicles and reduced fuel expenditure. Mr. Dodé described the installation process as “very good” across their wide variety of vehicles including Mercedes, Fords, VW’s, Peugeots, Ivecos and Renaults.

The Buses 4U scheme operated by ESRTP has been a great success and offers a combination of fixed route services and demand responsive transport. “Using Quartix provides a quick, effective method of checking the progress of our vehicles and highlighting any issues”, added Mr. Dodé. ESRTP also offers MiDAS (Minibus Driver Awareness Scheme) and PATS (Passenger Assistant Trainer Scheme) to maintain a high standard of service, safety and consideration for its passengers.

Quartix supports many customers in the public sector and amongst Community and Charitable Groups as it is able to offer an award-winning product combined with personal service from within the UK, free installation and an unrivalled installer and engineer network.