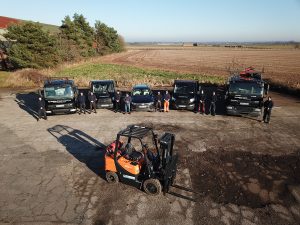 Since taking over the role of Operations Manager, installing Quartix vehicle tracking is probably the best move we have made!

With drivers using company vehicles to deliver parts across the whole of the UK, The Pontoon & Dock Company needed a way to see where they were at all times, for safety and peace of mind.  The company chose Quartix as its vehicle tracking supplier in 2019.

The Pontoon & Dock Company has been in operation since 2009.  Based in Burton on Trent with a warehouse & distribution centre in High Ercall Telford, they are one of the leading suppliers and innovators of pontoon solutions and marine accessories in Europe.

Coming on board with Quartix

“Installing the system in our fleet of vehicles was simple”, said Operations Manager John Vernon. With Quartix’s network of 200+ subcontracted installers around the UK, it’s possible to have vehicle tracking devices installed and working within a matter of days.  Customers can also choose between two Quartix self-install devices, the Plug & Track and the Connect & Track.  Pontoon & Dock has employed the straightforward Plug & Track option—since the device is simply plugged into the vehicle’s OBD port, it’s the easiest and most flexible option.

“Our six months with Quartix have already helped us in some key areas,” says John Vernon.  “The driver behaviour reports, and MOT service date reminders have allowed us to make our fleet safer and to streamline our operations.”

With Quartix’s driving style analysis reports, The Pontoon & Dock company ltd have been able to chart its drivers’ performance, with the ability to have a thorough look at speeding, braking and acceleration.

“The system has helped to highlight when infringements have been made by our drivers,” John says.  “We can talk to them about how they can drive more safely and environmentally friendly, and we reward drivers who have good scores.”

Each driver is given a score based on their driving profile (speed, braking and acceleration) and those who are taking too much risk will stand out on the driving style league table in red.  The best drivers appear in green, and those in between are shown in amber. This report is an easy way to compare driving styles across an entire fleet, something Pontoon & Dock has used to make its company vehicles safer on the roads.

“My favourite feature of the Quartix system is the MOT and service date reminders,” John says. “Being able to keep track of our vehicle maintenance schedule with a single report makes my job much easier.”

The Quartix vehicle tracking system enables John to record all important milestones and reminders such as MOT appointments and insurance renewal deadlines. The full fleet report can be viewed online so companies with multiple vehicles, like Pontoon & Dock, can easily see which ones are due for service.

“The report even calculates when a vehicle needs to be serviced based on its mileage. I can adjust that date, of course, but it’s a good guideline that helps me stay on top of routine maintenance.”

“My favourite feature of the Quartix system is the MOT and service date reminders. Being able to keep track of our vehicle maintenance schedule with a single report makes my job much easier.”

Customer service is paramount to Quartix, and Pontoon & Dock has seen that reflected in their interactions with Quartix staff.

“Whenever we have needed them, Quartix staff are prompt to reply and quick to sort any problems we have,” John says. “Since taking over the role of Operations Manager, installing Quartix vehicle tracking is probably the best move we have made!”