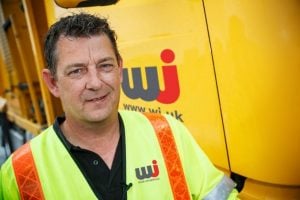 “Quartix driver behaviour reports have saved us £160,000. A 12% improvement in MPG and reduced CO2 emissions, plus fewer vehicle breakdowns and far less workshop hours… Results like these are precisely why we use telematics.“

Transport Manager, Scott Logan, has made full use of the Quartix vehicle tracking data to transform the carbon efficiency of fleet operations at WJ Road Markings. As the largest independent road markings organisation in the UK, with 25 offices, 8 depots and approximately 420 vehicles working throughout the night, the pressures on WJ to manage risks and reduce costs were mounting. Achieving a better performance on the road while considering the safety and wellbeing of drivers was critical for Scott and his team.

A previous telematics system had not been satisfactory in terms of customer support and costs, which led Scott to Quartix in late 2019. The results that WJ has since achieved are astounding.

A strategy for safety and sustainability

The business started by working with The Carbon Trust to find key areas for improvement. It quickly became clear that the main source of emissions for WJ was its fleet diesel consumption. Considering just one depot had a £1.5 million yearly fuel spend, this came as no surprise to the team, and they were eager to find ways to turn these figures around. WJ set out ambitious sustainability goals to be reached through an extensive driver training plan with telematics at its core.

In just one year of using Quartix vehicle tracking with a dedication to this cause, WJ has achieved:

WJ has been utilising vehicle tracking over the past two decades. As the business grew throughout its 30 years of operation, the need for a Transport Manager brought Scott on board in 2010. He took on the full-time management of an ever-growing fleet and experienced the challenges of a telematics system that didn’t meet expectations. “Our earlier supplier’s customer service was non-existent. We could never get hold of them. We were trapped in an expensive contract using mis-sold devices that just weren’t fit for the job. I wanted to switch to Quartix at the soonest opportunity,” explains Scott, who campaigned for change.

Starting with a few vehicles at one depot, Scott began the transition to Quartix vehicle tracking. “Our vehicles mostly work through the night, and we have regular training days so there were plenty of windows to fit the new trackers that required zero fleet down-time”, he recalls. The small-scale deployment convinced the business that rolling Quartix trackers out to the whole fleet would be a worthwhile operation, and so the process began. “The customer service we received was incomparable – it was clearly the right decision”, says Scott.

On training staff to use the Quartix system, Scott comments that the interface is intuitive. “It was easy to get going with Quartix. The system did everything we needed and required little training.”

“We use Quartix to measure driver performance, MPG and carbon emissions alongside accident statistics, maintenance costs and insurance claims. These KPIs give us a complete picture of the overall progress and show just how much of a difference the project is making,”

Transforming fleet operations for the better

Today, Quartix is used in all WJ departments for a multitude of tasks, with over 100 system users, ranging from Health & Safety teams to Supervisors. The valuable reports on driver behaviour are intrinsic to WJ’s sustainability agenda, and allow the business to operate a safer, greener and more cost-effective fleet. “We use Quartix to measure driver performance, MPG and carbon emissions alongside accident statistics, maintenance costs and insurance claims. These KPIs give us a complete picture of the overall progress and show just how much of a difference the project is making,” explains Scott.

Using these KPIs and the historic data available, WJ can forecast its vehicle costs more accurately. Scott reports, “We’ve upskilled our drivers and improved their wellbeing, reduced costs and improved our carbon efficiency – and got a far better handle on our operations in the process.”

“Initially, some drivers weren’t receptive to the suggestion that they could improve the way that they drive, and they offered excuses as to why the results might be unfair – “I have a bigger truck”, “mine is harder to drive” … It’s only natural. But it was easy to get them on board when we started showing them the reports, and funnily enough they were the ones with the best scores,” says Scott.

“In the first months of using Quartix, we had no drivers with green (good) scores. We started publicising the results, and we were inundated with questions from them about how to improve. They paid attention and wanted to turn things around,” says Scott. A year on and almost every driver has a green score. “Now, they are all competing for the top position – it’s always very tight each month, with most drivers scoring between 95-99.”

Scott set up an awards scheme to incentivise better driving at WJ. Each month, the top scoring and the most improved driver at each depot receive £100. The business presents annual awards to the drivers, Scott explains: “The top driver in each depot gets £1000, second place gets £750, and we give £500 for third place. The most improved driver in the whole company wins a track day.”

WJ also puts drivers through a training course called SAFED (Safe and Fuel-Efficient Driving). It requires them to drive a predetermined route and show how they normally drive, then an instructor shows them the correct way to handle their vehicle, proving that there’s no difference in the time that the journey takes. “Our drivers change the way they are driving and embrace the coaching. Fatigue and mental health are significant issues, and this helps address those – the teams still have to go to the same places that they always have, but there is less pressure and it’s less rushed due to the training.”

“In the first months of using Quartix, we had no drivers with green (good) scores. We started publicising the results, and we were inundated with questions from them about how to improve. They paid attention and wanted to turn things around.”

A partner that suits your business

Selecting Quartix vehicle tracking wasn’t just about the system features that were available to WJ, it was also about finding a supplier that understood its business operations and shared its goals.

“Our trucks all have PTO (Power Take Off). The equipment runs hydraulically and needs the engine running – so we can’t install an anti-idling policy or create savings that way. Having the vehicles idling is our only way to make money,” Scott explains. Having previously battled with reducing the MPG of its fleet for this reason, the business found ways to achieve a better MPG using the Quartix driver behaviour reports.

Going electric is not currently an option for the majority of the WJ fleet. Since the trucks are mainly specialised and custom built, their electric counterparts would cost in the region of 500% more to source. However, more than 40 company cars at WJ are hybrid models and the business plans to use a separate Quartix account to track these, with increased privacy settings. “Our staff had some concerns around GDPR and tracking company cars, but we ran a survey and Quartix helped us to answer all of their questions,” Scott explains.

Being able to connect data from WJ’s telematics system to other key platforms has been a valuable feature. Scott explains how WJ is using Quartix to interface with a fuel management system: “We feed our Quartix data into FuelTek via the API. It takes odometer readings and automatically marries them with the amount of fuel that’s put into the vehicle. When this was a manual input, we were finding that staff were entering incorrect mileage, and this prevented the next driver from getting fuel without a system reset. The integration eliminates human error and saves us a lot of time troubleshooting.”

The WJ story proves the tremendous results that an organisation can achieve with a clear set of goals, the right tools and a partner that supports its journey. Scott describes the experience so far: “The results we’ve achieved are more than we could have hoped for. Quartix has accommodated all of our business needs and supported our ambitions.”