Independent research shows that four in five young driver deaths occur on rural roads¹, but very few drivers break the 60mph speed limit on these roads². So, experienced motorists are setting their own speed limit, well under the official limit, on some of the UK’s deadliest roads, according to new research from Quartix. The study applies to rural, single lane carriageways with a 60mph speed limit. The roads are widely known to be the UK’s most dangerous, with more deaths and serious injuries occurring on them than any other³. It shows that more experienced drivers are aware that it is not always safe to drive at or near the speed limit – something learned over a period of years.

Below is a table detailing 10 of Britain’s deadliest roads with exclusive data from Quartix revealing the average speed of the road or the ‘free flow’ rate (no congestion.) 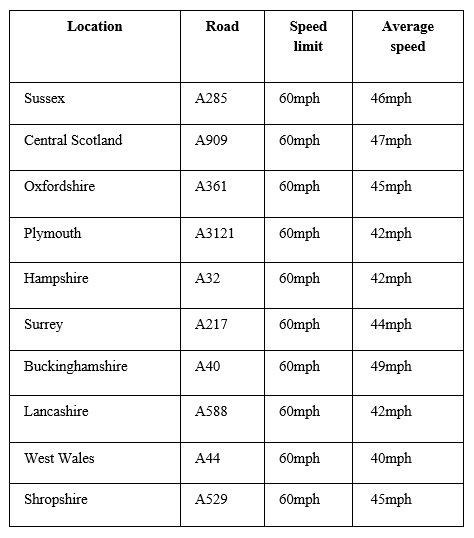 But younger drivers do not always have the knowledge to drive at the speeds set by other more experienced drivers. Without a parent in the car, they are left to their own devices on roads with a toxic mix of sharp bends, poor lighting and a 60mph speed limit. Insurers are increasingly requiring younger drivers to fit a telematics device to their vehicle so they can monitor their driving style and intervene when they break the legal speed limit.

However Quartix telematics devices4 measure how fast a vehicle is travelling based on the true safe driving speed of a particular road which, as the table above indicates, can be up to 20mph slower than the speed limit. This is known as ‘contextual speed scoring’ and allows insurers to intervene and contact a young driver (and their parents) if they are consistently driving at an unsafe speed – regardless of the speed limit.

Andy Walters, Quartix CEO says, “This research shows that experienced drivers are ditching the statutory speed limit and driving at what they consider to be a safe speed on rural roads. The problem is young drivers are often taught to drive ‘to the limit’ and this, put simply, is dangerous and often life threatening. In many ways, parents telling their children to ‘stick to the speed limit’ is the worst possible advice they can give. In an ideal world parents would be in the car alongside their children at all times to advise them on when to slow down and when it’s safe to go faster. We know that’s impossible and that’s why Quartix is deploying virtual parents to fill that gap.’’

Jae Pearce, Director, Sky Insurance Brokers, which specialises in insuring young drivers, added, “We’ve now insured around 4,500 drivers whose vehicles are fitted with Quartix devices. Every time a young driver goes above the average free-flow speed we call them to discuss their driving style and remind them about how to be safe. The first two thousand miles of a young driver’s career are the most dangerous, accounting for 80% of all claims. But we believe this new technology based on the average flow rate of rural roads rather than the technical speed limit is genuinely saving lives. Since we’ve been using contextual speed scoring we’ve had no serious accidents.’’

2 7% of drivers break the speed limit on rural roads with a 60mph limit. Source: Royal Society for the Prevention of Accident.

3Source I Am Road Smart.

4The SafeSpeed database records more than 30 million data points each day from 100,000 experienced drivers and then matches them against more than 2 million sections of the UK road network. It then monitors young drivers against these speed distributions.