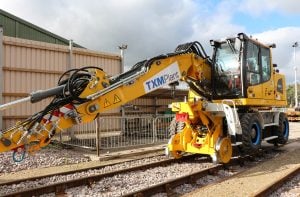 Quartix’s driving behaviour reports are excellent. If you utilise them properly and work with them to bring about changes, they will give you so much useful data.

TXM Plant Hire Ltd is the leading supplier of Road Rail Vehicles in the UK. For over 25 years, TXM Plant has hired out its fleet of vehicles and machines to rail companies, such as Network Rail and their subcontractors, when they are installing new tracks or making repairs to the rail lines or overhead wiring. As rail construction projects run on tight timetables, TXM Plant also has engineers on call to fix machinery and keep projects on track.

TXM Plant has partnered with Quartix vehicle tracking since 2015, before Jerry Hughes joined the company as their National Procurement Manager. “Quartix’s live tracking was the initial appeal back then,” he says. “We are currently tracking assets of around £35 million, so we have to have a reliable vehicle tracking system that allows us total visibility.”

Due to TXM’s vehicles being deployed over miles of track, engineers must always be able to find them. Quartix’s live tracking lets the operators at TXM Plant’s depots do this 24/7.

“We have customised the Quartix system so that each depot can see their specific vehicles and assets,” Jerry says. “It works for us, but there is room for even more configuration when we need it.”

Quartix vehicle tracking is designed to allow users to configure the system to their individual needs. This can be as simple as using colour-coded icons on the live tracking map to denote types of vehicles or as specific as establishing varying levels of privacy controls for each day of the week.

“The system is very easy to use,” Jerry says.

“Although initially we installed vehicle tracking to help keep track of our assets, we have found the driving style reports to be incredibly useful.”

Like many large companies with a fleet of drivers, TXM Plant has a company speeding policy that they have enacted to bring down incidences of speeding and mitigate the costs associated with bad driving behaviours.

“Anyone going a mile over the speed limit is breaking the law, so we are serious about looking at speeding. But we correlate to it to driving time, too–was it an instance of over-taking or were they speeding consistently?” Jerry says. “The absolute key to this is data, making sure we have reliable data from our vehicle tracking system.”

“Anyone going a mile over the speed limit is breaking the law, so we are serious about looking at speeding. But we correlate to it to driving time, too–was it an instance of over-taking or were they speeding consistently? The absolute key to this is data, making sure we have reliable data from our vehicle tracking system”

Quartix offers a suite of driving style reports, such as the daily driver briefing which gives a complete look at a driver’s performance across the day, with a colour-coded score based on speeding, braking and acceleration. There is also the driving style league table which ranks drivers by their tabulated scores and allows a fleet manager to easily see who is driving safely and who needs attention.

“Quartix’s driving behaviour reports are excellent,” Jerry says. “If you utilise them properly and work with them to bring about changes, they will give you so much useful data.”

TXM Plant has even seen a reduction in idling after using the Quartix reports to coach its drivers. “We monitor idling, with a focus to train our drivers. Because of the nature of their work and the fact that it often takes place at night, sometimes drivers will keep the engine on to provide warmth. We encourage them to switch the engine off and save fuel and it works.”

TXM Plant regularly installs new trackers or moves the devices between vehicles, and Jerry has always been pleased with Quartix’s customer service.

“We’ve had a great experience with booking engineers to install new trackers or swap them; it’s a seamless process. In fact, we’ve recently signed up for another year for all of our trackers and we’re very pleased.”

“Quartix is always very responsive to our requests. From a manager’s point of view, their willingness to work with us regarding costs and lost trackers has been appreciated. We’ve worked very well together for the past five years, and there’s definitely a feeling on both sides of wanting to build on this relationship going forwards.”

“You might find vehicle tracking for less, but you do get what you pay for,” Jerry says. Quartix provides the visibility that TXM Plant requires and the reports it needs to keep its fleet running smoothly for its customers. At the end of the day, with millions of people depending on the UK’s rail system, everyone benefits from this reliable partnership.